Ezra Blount Death: 9-year-old Ezra Blount crushed during the stampede at the Astroworld Festival in Houston has died, taking death toll to 10.

Eight fatalities were initially recorded from the catastrophic event at the Grammy nominated rapper, Travis Scott’s Astroworld festival in Houston, Texas, at NRG Park on Friday, November 5, before a 22-year-old Indian-origin, Bharti Shahani becomes the nineth victim to die from the crowd surge five days after the tragedy on Wednesday, November 10 which took death toll from the tragedy to 9.

On Sunday, November 14, 9-year-old Ezra Blount who had been placed in a medically induced coma on life support becomes the youngest victim to die from the event when he succumbed to injuries sustained after he was crushed during the crowd surge at the festival, which took death toll to 10. 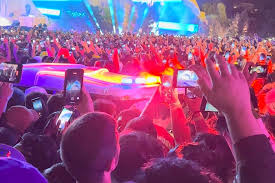 The death of Ezra was announced via a statement released by his family via their attorney, Ben Crump. “The Blount family tonight is grieving the ultimate, incomprehensible loss of their precious young son. This should not have been the outcome of taking their son to a concert, a joyful celebration. Ezra’s death is absolutely heartbreaking. We are committed to seeking answers and justice for the Blount family. But tonight we stand in solidarity with the family, in grief, and in prayer.”

The Houston-born rapper, Travis Scott, had earlier pledged to cover all funeral costs of victims who died at his Astroworld Festival via a statement released by the producer’s team, “The first of many steps he plans to take as part of his personal vow to assist those affected throughout their grieving and recovery process.”

Amongst already identified victims from the Astroworld crowd surge ARE.