Father-of-two and Port Beach regular, 57-year-old Paul Millachip was identified as a shark attack victim at Port Beach in Fremantle early on Saturday.

According to reports, the tragic incident happened around 10 a.m. when according to witnesses, saw Mr. Millachip struggling in the water before being pulled below the waves by the shark which was believed to be a 4.5m great white.

Sea patrols searched through Saturday and most of Sunday in quest to find Mr. Millachip, but the authorities were unsuccessful. Police announced the search would be suspended at 4pm on Sunday. 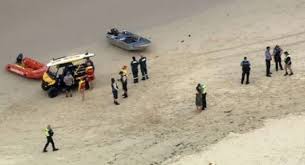 The wife of the victim, Mrs. Millachip has paid tribute to her husband, “Rest in peace Paul. He died doing what he enjoyed doing the most which was exercising.”

“He was a wonderful man, a wonderful father and he loved his exercise.” She went further to describe the pain of losing him as “very hard.”