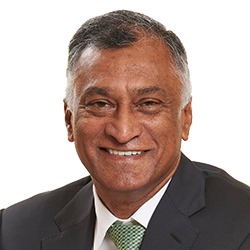 Vassi Naidoo Death – Obituary: The corporate world has lost a giant with the untimely passing away of Vassi Naidoo, chairman of Nedbank since 2015, after a long battle against cancer.

Naidoo was appointed chairperson of Nedbank in 2015 after retiring from the accounting firm Deloitte in 2014, where he had spent 37 years.

Naidoo completed his BCom degree and Diploma in Accounting at the University of Durban Westville. He joined Deloitte in 1977 and qualified as a chartered accountant in 1979.

Vassi was also the chairperson of private real estate development company Gateway, Delta Development Holdings and of the WWF Nedbank Green Trust. He also sat on the board of Liquid Telecommunications.
Vassi was a perfect gentleman. Despite his meteoric career advancement, he never lost the common touch. May his soul, through the grace of God, rest and rise in peace.

He was appointed  CEO of Deloitte Southern Africa in 1998 and chairperson of the Africa Board in 2004. During his tenure at Deloitte, he worked in Africa, Europe, Russia and India, and also served on the global executive of Deloitte.

“We are grateful for his guidance, leadership and wise counsel,” said Nedbank CEO Mike Brown. “He has always been considered a pioneer in his field and he used his position of influence as Nedbank chairman to bring about positive change and dedicated much of his time to finding ways to improve the lives of every South African, including being the catalyst, alongside Pravin Gordhan and the late Jabu Mabuza, for the CEO Initiative.” Mabuza died of Covid-19 in June this year.

More than 90 CEOs joined the CEO Initiative in 2015 to help stave off an economic crisis and liaise with government.

Vassi is survived by his wife Sheila who was a teacher, their two children and 4 granddaughters. Obituary and Funeral Arrangements are still pending…